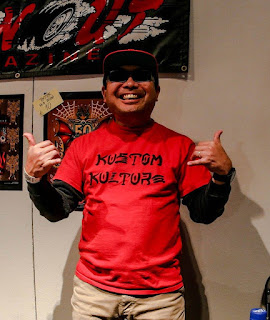 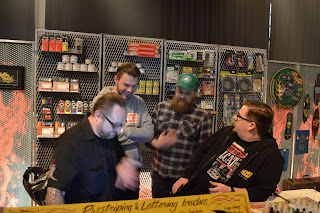 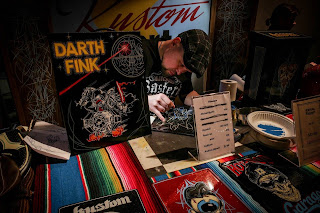 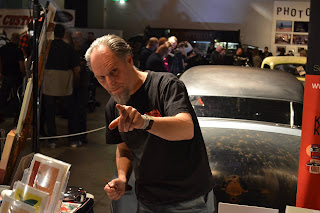 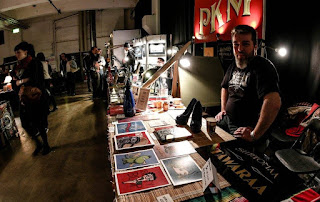 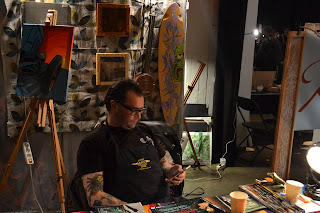 Saturday was busy and the show turned into a party at the end of the day.
The two Japanese Pinstripers attending the show, Boo and Jetwrench, only had one job each and were waiting for customers the rest of the day. A shame considering, they are among the elite pinstripers from Japan. I bought shirts and signed posters from them.
The Nash explained his way to nurture the Japanese pinstripers with influences from the world trips he is taking them to. Very inspiring person and a great ambassador for the Kustom Kulture movement.
Keith Weesner’s and Max Grundy’s were more busy, selling shirts and posters, which was good to see. It is horrible seeing artist not being successful and not sell enough at a show.
My auction object, ‘The Finker’ only brought in 110 Euros. It took me a few hours to produce it to the high level of quality it finally was. Marco & Pekka were a little disappointed, but Marco told me Rat Fink is not of a lot of interest in Finland.....lesson learned.
My short conversation with Pekka Wizz confirmed my already positive attitude towards the Finnish pinstriper community and their 'sharing is caring' approach.
The following party was crazy and long. A lot of drinking, a lot of drunken people and a lot of fun.
The night was short and the Sunday hard. But with the few visitors not a big issue.
This is also when the big art swap among the attending artists started and people came around to exchange art.

The Sunday was slow, but Udo, Jens and myself had a good night out on Sunday with Fernando and Chanil. We went to Bar Loose again (the pre-party happened there) where a Blues Jam Session took place. 3 songs per group of musicians, then the band was exchanged....the quality was extremely good (with 2 exceptions - 'Jimi Hendrix' was forced from the stage by the drummer and bass player) and they played until 24.00. We had lots beer. Not as much as the people around us, but enough to enjoy the evening. Genau.
The trip home was exhausting and not as much fun as the arrival.
We missed out on the garage tour, organized for the international artists. The club car with which we were picked up, was already fully booked, so that we missed out and had a less thrilling ride to the airport. The flight, though was cool. The stewardesses had a lot of understanding for my two thirsty partners and provided them with a lot of free beer throughout the flight. I suspect they needed to clean the storage from over due beer...

I made a lot of new friends i would like to meet again in the future. The Finnish pinstriper community is superb and I would definitely like to keep contact.
Overall it was a great time, and attending in 2017 is being considered - need to check with my family before confirming...